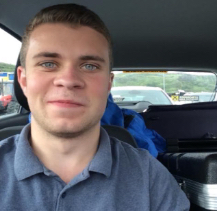 Robert was a student at the Music School between 2010 and 2016, the only student to complete the full six high school years at the centre since its opening in 2000. Robert joined the staff in 2018 as a tutor on the newly launched Development Programme. He also manages the social media pages, along with assistant tutoring during the normal day to day schedule of the music school. Robert has a wide range of music tutoring experience, in schools and groups as well as one to one. He has been involved in numerous Scotland wide music and language projects, including the roll out of Gaelic and music into primary schools under the new L2 Government scheme. Robert is also a radio presenter.
SUPPORT US      FAQ      VIDEO
Call us 01599 544706
Apply form
HMIe Report
Accordion
Bagpipe
Clàrsach
Fiddle
Guitar
Piano
Gaelic Song
Cello
Scots Song
Flute and whistle
Development Programme
Welcome from the Director
Centre Background
Staff
Curriculum
The Pupil Residence
Plockton High School
FAQ
S6 Course
Audition Process
Drums