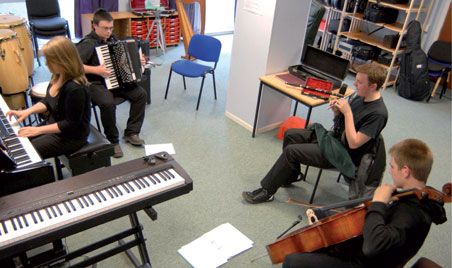 In 1999, the Scottish Executive established its Excellence Fund for education, and invited the 32 Scottish local authorities to submit bids for appropriate projects. Recognising the wealth of traditional music activity generated by the Fèis movement and others, The Highland Council submitted a bid for a residential Centre of Excellence specialising in traditional music. The bid was successful, and the National Centre of Excellence in Traditional Music was established at Plockton High School in May 2000 with funding of £500,000 over three years from the Scottish Executives Excellence Fund, with additional input from The Highland Council. As a result of the 2008 concordat between the Scottish Government and local authorities, the Centre is now directly funded by the Highland Council.

The choice of location was significant. Plockton, on the west coast of Ross-shire just opposite the Isle of Skye, is at the heart of a wide community which has long been known for its support of traditional music and Gaelic culture. Both the school and the wider community have good track records of achievement, particularly in piping and in Gaelic medium education.

The Plockton project is unique amongst the Scottish Centres of Excellence set up in 1999, in that it concentrates specifically on one genre of music. That genre is Scottish traditional music and has been regarded by many people as testament to the huge growth in popularity and intrinsic importance and value of Scotlands native musical culture. It was also decided early in the life of the project that it would not be strictly vocational. Even today, there still remain few genuine career opportunities for traditional music, and therefore a balance has been struck between the students musical and academic commitments which enables them to choose the professional music route if they so desire, but which also keeps all other career options open to them.